Older adults who are looking for self-defense strategies should consider Cane Fu. Seniors often do not have the physical strength to subdue an attacker, but with the right training and skills, a simple, discreet walking cane can become a deadly weapon. This 91-year-old man using his cane against an attacker is just one example.

What is Cane Fu?

There are three branches of this martial art in the United States. The first is Dave McNeill’s Goju Shorei. The second is Mark Shuey Senior’s American Can Systems, otherwise known Cane Masters. The third is Joe Robaina’s Cane-Do Kai.

This art is becoming increasingly popular as it uses a handy and easy-access tool, which is the cane. Before this phenomenon the use of a cane was usually associated with a sign of old age and the weakening of the limbs.

The purpose of the cane is to add some stability while performing basic day to day tasks either indoors or outside. It has since been getting some exposure to the general public after being featured in front page of the Wall Street Journal.

The article received mixed reactions for the way they presented this new form of self-defense; which is as an “old folk`s art.” Seniors who have tried the Cane Fu agree it has given them more courage, because even though they’ve never had to protect themselves in a real-life situation, the confidence they get from it gives them more peace of mind.

Vic Cushing, 68, is the perfect example why seniors should take up on Cane Fu. He had to use his Cane Fu training to protect himself on more than one occasion. In one occasion, he chased away the aggressor by using simple but effective techniques such as pushing the cane on to his chest and making him lose his balance which was then followed by few strikes to the body of the would-be mugger.

Aside from its ample benefits of empowering the elderly, Cane Fu is also a safe way to get some exercise. The exercises benefit the body by building arm strength through the use of the cane and also significant know how on how to control and manipulate one selves’ center of gravity can be gained from this new form of art.

There exist more than 3000 “cane masters” that can be found at your local senior homes and facilities that provide tremendous support in assisted-living. Basic Cane Fu skills can be taught in any one of these institutions. These sessions usually last about an hour or so. Here we will explore the art form for what it is and go through the history, its benefits and basic know-how on how to perform it.

The earliest known form of the modern Cane Fu self-defense art can be attributed to Colonel Thomas Hoyer. He was the first to write widely on the use of cane as self-defense methods and was one of the best-known masters of fencing in America of his day.

Colonel Thomas had an outstanding record when it came to fighting as well. He had fought under twelve banners, survived in over fifty sword, knife, and gun duels, and received about twenty two scars on his body to show for it.

Monstery explained his cane defensive technique in 1878, following his chapter on boxing, wrestling and kicking in a collection of articles written in the New York press. One day, Monstery had an interesting encounter with agents of the Spanish secret service who were bent on assassinating him.

But the effort of these knife-wielding agents were ineffective as he was able to successfully defend himself using the only thing that was readily available to him at the time; which was his hickory cane. He used this hickory as a self-defense tool to chase away his assailants fled into the night.

The principles for Monstery’s cane self-defense were mainly borrowed from fencing and the saber or broadsword. But few significant modifications were needed to be made due to the concussive (rather than cutting) aspect of the cane. This resulted in the changing of the possible areas of attack on the body to differ than that with a sword.

Another name associated with the creation of the art of Cane Fu in the modern era is Mark Shuey. Mark Shuey is a 73-year-old former world champion that is trained in forms of modern fighting techniques, including weapons. But it wasn’t until about a decade ago that he noticed how the Cane was being overlooked as a self-defense tool.

Shuey was studying Hapkido at the time, along with three other martial arts, and was learning the cane. He discovered that there were no martial arts systems specifically for the cane. “This amazed me, because the martial arts pride themselves on taking tools and making them into weapons. The cane is 5,000 years old and no one – especially when it came to the crook cane – had started a system.

So I was able to put a system together on the cane, on the crook cane specifically, and I was able to find my niche in the martial arts.” It was at this particular time that he who sought to create a form of exercise that is senior-friendly and uses a tool that was readily accessible.

But this was just the start as he was also shattering the stigma attached with the use of a cane. His training programs helped empower numerous elderly people and over 900 disabled veterans.

What Type of Cane Can Be Used?

Self-defense canes have a thicker shaft to protect you from being struck with a pipe or baseball bat by a mugger! A cane with a one-inch shaft is a fine all-around choice. Thicker shafts make for further shaping, which is useful for both pressure points and decoration. Remember that the safest self-defense tool is the one you carry on you at all times. The “best” weapon for self-defense is the one that is in your hand when you need it!

While any cane can be used, the best canes for self-defense are made of hardwood, because they don’t break on impact and they deliver a hard hit. Read this from the WSJ article:

Most of the seniors who take cane classes rarely wield them against anyone. But Bill Carter, a 56-year-old who took a class from Mr. Shuey in Florida a few years ago, says the instruction came in handy one day in April last year when he walked into his house in suburban Jacksonville to find an intruder in his kitchen taking TV dinners from the freezer. As the man approached him, “I popped him on the kneecap,” Mr. Carter says, and “hooked him behind the neck, and was able to guide him to the door.” 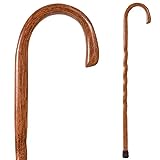 Any old cane can be used as a walking stick, a Cane Fu style cane has several specific features that make it more suitable for use in defending one’s self, or for exercise.

While a medical cane may be a lightweight aluminum cane, a martial arts cane is usually made of wood. Although any wood can be used for a cane, typical woods crude oak, hickory, crocus, or rattan. Decorative cane woods may include cherry and walnut.

5 Basic Self Defense Moves with a Cane

Most the cane fu self-defense moves involve poking and swinging the cane towards the aggressor. These moves should be performed while maintaining your center of mass.

First and foremost, you need to know how to block a strike from the assailant. Observe their body language and from which side the punch is coming from. Then take your cane and use it to stop the momentum of the strike.

If your find yourself getting choked (gripped in the neck area), there is an effective way of handling this situation. Put your cane between you and the aggressor then use both your hands to push down. This is a simple move that can be helpful in a moment of attack. You can follow this up with a swing to the body or poking to the abdomen area.

This move is performed by driving the end of the cane to the aggressor`s abdomen area and pushing till the peak of our reach.

Swing your cane on to the body of the perpetrator targeting the upper parts of the body. While doing so, remember to fire from your back leg just like the picture shown below.

Senior Self-Defense Tips with a Cane

The ideal training for Cane Fu is with a qualified instructor. If this is not available to you, it is possible to gain some basic cane self-defense training directly from books. Here are a few to consider:

Cane Fighting: The Authoritative Guide to Using the Cane or Walking Stick for Self-Defense
$12.99
Buy on Amazon
Sale

There are a lots of self-defense arts out there which can be useful to your state of mind and body as well. Cane fu is one of those ways to gain the above-mentioned pros at a budget. It is simple, fun, and a very useful form of self-defense that anyone can learn in a matter of few hours.

About the Author: Yeabsira Zeyede has a third-degree Black belt in the Chinese wushu kung fu martial art and specializes in tai chi. This article is based on the knowledge and experience he acquired along the way. Find him on LinkedIn.

Adaptive Clothing for Wheelchairs and Seniors

How to Choose the Best Walker in 2022

The 91 year old didn’t defend with his Cane. He was hit by a cane that the mugger had

They both did. It was a crane fight.

Please rethink the few moves. Blocking a punch is just not going to work. You would never be able to move the cane fast enough to block a punch. Thank you.