Can Tinnitus Go Away on Its Own?

Tinnitus is a condition where you hear constant noise in the ear that won’t go away, or ringing or swishing sounds in the ears or head. The interesting part about this is that there is no sound outside in the environment that is the cause of it. So technically, it shouldn’t happen.

Can tinnitus go away on its own?

There are different causes of tinnitus. Tinnitus may go away on its own but it depends on the cause. If it is caused by something like a build up of earwax or an infection, treating the source can make the tinnitus go away. If, however, your tinnitus is caused by trauma or damage to the ear, the tinnitus may be with you for life.

Before you give this question about whether tinnitus will go away on its own any consideration, it’s important to consider what the cause of tinnitus is.

If you are suffering from tinnitus it is important to get a consultation with an Ear, Nose, and Throat (ENT) doctor. A doctor of this type can help you more firmly determine the source and whether the tinnitus you have will go away on its own.

These could be genetic disorders, already diagnosed hearing loss, neck injuries, head injuries,  tumors of the auditory system, blood vessels or neurological disorders, hardening of the arteries, or brain aneurysm.

The trauma can come from damage to the hearing apparatus from loud noises, and damage from painkillers, seizure medications, and antibiotics. In 1996, Israeli doctors reported in the medical journal called Drug Safety that there were over 130 different drugs that could damage the ear and hearing. The phenomenon is called ototoxicity, and it’s thought to involve biochemical and electrophysiological changes in the inner ear and eighth cranial nerve impulse transmission.

This is a really important concept to understand because really, no one should have to lose their normal sense of hearing and develop tinnitus just because they are taking medications.

The medications that are the most likely culprits are:

Discontinuing the drugs may be necessary to prevent permanent damage.

However, there’s a little-known cause of tinnitus that occurs from high electromagnetic field in your home from Wi-Fi, smart appliances, Alexa, smart meters, and nearby cell phone towers or electric high voltage wires.

Radiation specialists that measure electromagnetic voltage inside homes always report that tinnitus is a common problem when the EMF are not normal. They may be found and consulted with at the Building Biologist Institute.

In the process of aging, changes are occurring in all organs as well as the blood vessels. Simultaneously, there are vitamin and mineral deficiencies that become worse with time if the nutrient levels are not returned to normal.

Certain nutrients such as copper and vitamin C are critical to the blood vessels, and when small tears occur in the arteries, these nutrients are responsible for the repair. Without repair, the arteries start accumulating plaque, restricting blood flow, and this in turn, can cause tinnitus and loss of hearing.

Another way that aging affects hearing is that degeneration occurs within the inner ear. The nerve pathways to the brain are also affected. This can occur due to high levels of blood sugar from pre-diabetes and diabetes as sugar deposits itself on nerves throughout the body. Sugar causes dysfunction of nerves by binding up the proteins in the cells, making them dysfunctional.

The good news is that there are now treatments for tinnitus.

This device is a patented wristband that works with an app on your cell phone. You listen to tones and feel vibrations on the skin for 15 minutes daily for about 8 weeks. The app tracks your progress.

The sounds reprogram the brain for hearing sounds. The device is non-invasive. It works because touch plus sound together – called bimodal stimulation – can reduce the tinnitus according to research.

In one study, there was an improvement of 87.5% of the volunteers and the average severity of the tinnitus diminished by 33%.

The device costs about $250 per month and there are only two payments. The patient receives two video consultations with an audiologist and gets ongoing support as well.

This type of treatment is considered a sound-masking device that then allows your brain to accommodate to the ringing in the ears. 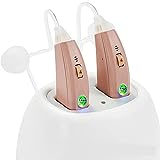 When someone has hearing loss, the brain changes in how it processes sound frequencies. Hearing aids work because they magnify the sound via a microphone, amplifier and speaker so that external noise may be heard. Tinnitus is internal noise, not external so it is noticed a lot less when a hearing aid is used.

In one study, about 60% of people with ringing in the ears had some relief, with 22% of them finding significant relief.

When you look at hearing aids, you will of course need professional guidance for selection of it but look for ones with noise canceling, amplifiers, charging dock and ones that are compact. One to take a look at is the iBstone Hearing Aid. 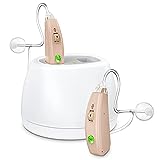 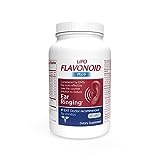 Nutritional supplements have been tested and proven to show therapeutic benefit for tinnitus. One of them is called Lipo Flavonoid. It contains vitamin C, B1, B2, B3, B5, B6, B12, calcium, choline, and inositol. It’s the #1 ENT doctor recommended supplement for ringing in the ears. The dosage is 2 caplets 3 times a day. It’s basically a B complex with vitamin C.

For more information on this subject, visit my other article on the best minerals and vitamins for hearing loss. 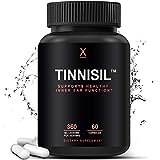 Tinnisil is a little more well made as a supplement for tinnitus. It contains Vitamin C and B vitamins but also Vitamin A, vitamin E, magnesium, zinc, ALA, CoQ10, and Ginkgo biloba. The antioxidants are more balanced as it contains vitamin A, C and E.

Although there is only 100 mg magnesium in the supplement, it is a little bit that may make a difference if supplemented with some additional magnesium. Magnesium has been found in research studies to reverse hearing loss. And Ginkgo improves the circulation to the brain, which can only help – bringing the nutrients directly to the tissues that need it.

Clear Tinnitus is a homeopathic formula designed to treat tinnitus. It has gone through some clinical trials. While it’s deemed that more trials are needed to determine its efficacy, there were positive results found in some of the participants.

5 Signs Tinnitus is Going Away

When you start your program of reducing hearing loss and tinnitus, you’ll need to know what to look for to see if it’s working.

Below are five signs that your tinnitus is improving.

Can Tinnitus Go Away Summary

There have been major advancements in the field of audiology for bettering your hearing. Always look for the root cause of why you are experiencing the ringing in the ears first. If it’s due to medications, that’s an easy fix and your doctor can change your medications.

If your nutritional status isn’t too good, fixing this could start to give you restoration of normal hearing. If there’s already hearing loss, using a hearing aid and/or some of the new devices that use sounds to retrain the brain could be your answer. Remember that your answer doesn’t have to be one thing by itself; it could be a combination of three different solutions that give you the best results.

Saggy Butt Exercises for Toning Up