What is Thick Water and How to Make It

What is Thick Water?

Thick water is water that has been thickened to make drinking safer for those who have difficulty swallowing. It is one of a few different alternatives to (standard) water for dehydration.

Right now, the number of those who are in this category in the U.S. is 15 million, according to the National Foundation of Swallowing Disorders. Thick water might sound like a foreign concept to everyone else, but for those who have swallowing disorders, thick water could be an everyday source of – safe – hydration.

What happens for these people is that they have muscle or nerve damage to the anatomical structures so the food and beverages consumed can get ‘stuck’ in the throat.

And you might not know it but 50 pairs of muscles and nerves contribute to the whole act of swallowing.

A swallowing disorder is called dysphagia.

Signs of swallowing disorders include any of the following:

The problem that if someone can’t swallow their food, it can end up going down the wrong ‘tube’ and goes to the trachea. It’s supposed to go to the esophagus. This is called aspiration and the food then is entering the lungs. It can lead to pneumonia or death.

What Diagnoses are Associated with Swallowing Disorders?

In one dysphagia survey of 31,129 people, 16.1% of them reported they had dysphagia, and 92.3% of them had symptoms in the previous week. When they checked to see how many of these people described their swallowing problems as severe, the number came to 16.3%.

Eighty-six percent of them drank liquids to help with swallowing as part of their solution. And 76.5% of them said that eating more slowly was another good compensatory maneuver.

Overall, a little over half of those reporting dysphagia – 51.1% – sought care for their swallowing challenge. Some of the reasons why they had these challenges were diagnoses of GERD (gastroesophageal reflux disease), inflammation of the esophagus, and stricture in the esophagus.

The National Foundation of Swallowing Disorders recommends tucking the chin downwards while swallowing. What this does is closes off the trachea so food won’t be aspirated. Turning the head to one side may also work to improve swallowing.

Thickened liquids flow more slowly than regular ‘thin’ liquids like water, milk, or juice. The speed of flow when slowed can be good to allow muscles a little more time to react to move food to the right place. Similarly, pureeing foods gives them a smooth texture and may help.

A dietitian and speech pathologist can accurately assess the situation someone is facing and determine what may be the best strategy to overcome the swallowing disorder, or at least alleviate it.

Why Some People Need to Drink Thick Water

There are other reasons why people might have swallowing disorders. For example, if someone has a stroke, it may affect the cranial nerve that allows the muscles to function in swallowing. Thus, their swallowing is now hampered.

Another reason is head, throat and neck cancers, which are notorious for affecting eating and swallowing. Usually it’s the radiation damage from the cancer treatments that cause the swallowing challenges but it may also be the cancer itself.

When a tumor grows so large as to block the ability of swallowing, it must be surgically removed. And in the surgery, cutting the nerve that functions in swallowing may occur, permanently disabling the ability to swallow as usual.

Having problems swallowing is a bigger problem than what most people believe. For example, Dr. David Francis, M.D. at the University of Wisconsin School of Medicine and Public Health states that swallowing problems can end up causing people to spend more time in the hospital and more expensive hospital stays. It also makes it more likely that they will die in the hospital.

In one study published on the topic in 2015, researcher David G. Smithard of King’s College Hospital NHS Foundation Trust in London calls dysphagia a “Geriatric Giant/Syndrome”.

It occurs in those with increasing age, affects cognitive function, is common, multifactorial, contributes to death and a poor outcome, and causes a functional impairment, fulfilling the definition of a Geriatric Giant.

A Geriatric Giant is symptoms but not diagnoses in their own right. It’s a combination of symptoms that lead to functional decompensation.

If you are not interested in making your own thick water, you can buy pre-thickened water. If you purchase thick water, note that starch and starch-based thickeners are often added to it. They are tasteless and dissolve quickly into the liquid but must be immediately drunk.

Another ingredient added to liquids to thicken them is gum-based thickeners like xanthan gum. They can cause clumps but you don’t have to drink them immediately. 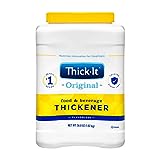 Thick water tastes similar to regular bottled or tap water. It’s often described to be as thick as aloe vera gel. And it does cause people to feel fuller more quickly because of the additives.

The Problem with Some Thick Water Products

You might want to try some thick water alternatives on the market but do give the whole concept some thought. For example, since when is adding even more starch to one’s diet a good idea? Would the starch be the GMO corn starch? Or would you be able to add your own starch such as tapioca starch to the water? At least then you would know it wouldn’t be a GMO addition to your diet.

And if thick water has a viscosity close to aloe vera gel, why wouldn’t you just add your own aloe vera gel to the liquid and drink that? It would be adding a functional food, one that provides some good benefits to your beverage (see a sample recipe).

The marketing for this product boasts a lemon flavor, refreshing taste and looks like natural tap water. Right there, you are alerted to the facts if you have a discerning mind:

How to Make Thick Water

Really, making your own thick water is the only viable and healthy solution. And if you’re thinking outside the box, this is an easy problem to solve.

How would you do it? You’d do the same thing that the commercial companies did to create their product but do it in your kitchen.

Here’s a list of items you can add to your water that will naturally thicken them:

Step 2 – Mix the Thickener with Water

You’d start with the substance to add to the water and then add a teaspoon to a glass of water and mix it. Then test it. Did it make swallowing easier? If so, you have your solution. If not, then you add a little more until you get to the desired effect.

One important note: Avoid using ice. We all like a cold glass of water, but adding ice in effect means adding water. If the glass sits for any amount of time, the ice will melt and disrupt your thickener-to-water ratio, which – depending on the individual – could make swallowing more difficult.

Thick water will take on the taste of the thickener used. Flavor additives (such as lemon or lime) can improve the flavor. The more striking different between thick water and “regular” water is the consistency. It’s thick after all, so expect it to have a gel-like consistency. This will bother some people, others not so much.

It’s great that some companies have taken an interest in those who have a need to drink thick water because of dysphagia, but it appears that they don’t have your best health interests at heart.

The ingredients they use to thicken water may be downright harmful. To stay healthy and overcome this swallowing challenge, you’re going to have to decide your health is more important than convenience of buying these thick waters on the market.

I suggest having some fun in the kitchen. Start experimenting and see what you can come up with to solve the swallowing issue. Your answer is in your immediate future.

10 Signs Death is Near for Dementia Patients

With what TOTALLY harmless, sugar free, substance can I thicken water for drinking? Once I have that answer, I want to flavor it for consumption.

Here’s a list of items you can add to your water that will naturally thicken them: