Women are fond of changing the color of their hair. It adds variety, it’s fun, and for many, it’s a way to cover up that gray hair that comes with age. There’s much to say about the hair dyes for gray hair, however. Let’s cover some of them before we look at recommendations.

Personal care products are largely unregulated in the U.S., according to Scott Faber, Environmental Working Group’s (EWG) Vice President for governmental affairs. EWG is known for its monitoring of environmental chemicals, toxins and poisons in the air we breathe, the water we drink, the products we use, and the foods we eat.

Grecian Formula is notorious for its toxic lead levels. One of the first studies that came out on it was in 1997 in the journal Cutis.

What can happen from lead toxicity? One user of hair dyes containing lead acetate ended up losing feeling in his hands and feet after seven months of use. He had been using the dye on his beard. It took a year to get back the feeling after he discontinued the dye.

The problem with lead exposure is that there is no safe level of lead. Yet, levels of lead in hair products were allowed to be as high as 6,000 parts per million (ppm) in 1980. In 1977, products such as house paint were banned if they contained > 600 ppm of lead.

Many people agree that companies shouldn’t be able to put their products on the market if they contain lead, and they should do the testing to ensure that consumers are not getting harmed by high lead levels.

Lead acetate was banned in Canada and the EU long before it was banned in the U.S. in 2018. However, just because it was banned doesn’t mean anything happened in favor of consumers. One of the latest sources on the topic states that the USFDA plans to enforce a ban on lead acetate in hair dyes beginning in January 2023.

Lead has been taken out of gasoline January 1, 1996 so it doesn’t harm the environment. It’s been removed from paint – this goes back to 1978. Why not remove lead intentionally from the personal care products as well?

Does Lead in Hair Dyes Penetrate the Scalp?

The answer to this question was published in a journal called Current Problems in Dermatology back in 1978. The three researchers first worked with 9 adult males who applied a marketed hair dye containing 2% lead acetate to their scalp to dye their gray hair daily for 90 days. Hair analysis tests were done at the beginning of the study and at the end.

Hair analysis tests have been used for over 50 years for toxicology. For example, if someone is found dead, a hair analysis test may rule out that the person was poisoned with arsenic, cadmium, lead, mercury, or other poisons of a chemical nature. These tests are considered quite accurate and are easy to do on someone who is living or dead.

Now the hair samples were taken from three different locations:  the scalp, armpit and pubic hair. Since the hair on the scalp was directly in contact with the dye containing lead, the levels of lead in the hair were expected to be higher as a result of the dyeing. But two other samples – that of the armpit and the pubic hair were not directly exposed. Thus, these hair tests should not be positive unless the lead from the dye ended up getting into the body and was circulating through the body.

This table shows the results of what they found:

Seven of the nine subjects showed levels >80 ppm in the armpit hair and four showed high levels in the pubic hair. The bottom line is that when there is lead acetate in hair dyes, some of it is going to be absorbed into the body.

You might think that what’s the difference – you’d rather look good for right now for your date or your upcoming family reunion, but think again. Short term looking good may not be good for the long-term if you are using a dye with lead acetate.

In one 2008 report on lead exposure from henna in hair dyes, amounts were found to range from 2.29 ppm to 65.98 ppm. (Now imagine what happens if you use them frequently.) Henna dyes are commonly used not only in the U.S., but also in the Middle East, Far East and North Africa.

What Else Should We Look For in Dyes?

It turns out that lead acetate might be the worst villain in hair dyes, but it’s not the only one.

In Asian cultural practices, it’s well known among those in the beauty industry that hair oils may cause contact dermatitis and inflamed hair follicles. Black henna and bindhi dyes may have para-phenylenediamine in them that causes an allergy reaction. These types of allergy reactions to ingredients in the dyes may lead to severe eczema in the face and upper trunk.

According to Environmental Working Group, a number of ingredients in hair straighteners, dyes and a combination of both product types are linked to an array of health issues, such as cancer, allergic reactions, and skin irritation. The use of some semi-permanent and permanent hair dyes have been linked to hair loss as well.

You can look up different products such as hair dyes in the Environmental Working Group data base called EWG’s Skin Deep®.

What are the Safest Hair Dyes to Cover Gray Hair?

If you’re using amazon.com for your personal care products, only one was found on the first few pages of the listings of the best hair dyes to cover gray hair. This one appears to possibly be good but actually more data really should be provided. This was a common problem with the Amazon product listings; they often didn’t list the ingredients!

This one is suitable for those who have an extremely sensitive scalp. It includes herbs that nourish your scalp. It takes only 20 minutes, not 60 minutes and prevents fading of the dye from sunlight.

The EWG data base rated the following products as pretty good, but in some cases, there just wasn’t enough data and EWG commented “limited data.” So it appears that you’re really going to have to dive into the topic if you want a good hair dye that isn’t going to harm you.

The product lists itself a “natural.” While I am skeptical of their use of the word, it’s an indicator that they are at least trying to market to the health-conscious consumer. The cover lists that it’s made of “natural botanicals and nothing else.”

The product description states that it is recommended by Safe Shoppers Bible and that it is non-carcinogenic.

Most people will be looking for something more permanent to color their gray hair, but this product is decent for short-term use. Because it is temporary it is going to lack many of the stronger chemicals needed for longer-lasting color. 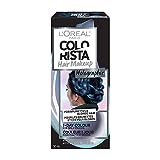 Because this product does not contain ammonia or peroxide, it’s safe to use without gloves.

This product has some of the best reviews of the hair dyes for gray hear listed here. Less of a true hair dye and more of a root covering, it’s appropriate for people who have already colored their hair but want a touch up around the roots. Extending the time of your hair dye means going longer without another treatment. That is fewer chemicals and lower cost. 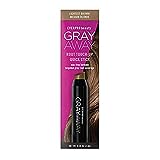 Note that this washes out with shampoo, but it is also wax-free and does not leave any residue.

People know the LoOreal name. This product also has strong reviews on Amazon. This, however, is probably the “least safe” solution listed here for covering gray hair. In fact, the manufacturer’s safety statement speaks to this:

Important: Haircolor and bleaches contain ingredients which may cause allergic and/or other types of reactions. A skin allergy test is required 48 hours before each use of a haircolor product. Bleaches contain persulfates. Bleaches and high-lift haircolor shades cannot be used on relaxed hair; for other haircolor shades, wait at least 14 days after bleaching, relaxing or perming before coloring. This is a safety summary. Read all product labeling and instructions completely prior to use. 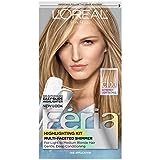 If safety is less of a concern for you, L’Oreal could offer the best bang for your buck

Hair dyes are not known for being the safest product to put on your body, but they’re popular nonetheless. What’s your best strategy? It’s to pick a good allergy-promoting chemical free product, one that’s also lead-free and to try it.

If you get itchiness or any other symptoms, choose another product. Don’t wait around thinking it will be better next time. And then don’t forget to do your regular detoxification habits so these harmful ingredients you don’t know about will be pulled out of your body.

How to Sleep with a Stomach Ulcer – 9 Steps

Where can I try on wigs for suitability?